The lethal effects of relative humidity on bacteria

The viability of three species of bacteria (pneumococcus type I, staphylococcus albus and streptococcus haemolyticus) nebulized from a suspension, was measured in a climatic chamber with adjustable different relative humidity levels and temperature.

Relative humidity had a striking effect on the decay rate! Decay rates peaked in the vicinity of 50% for all three bacteria, most significant for pneumococci (see graph).

The decay rate was strongly influenced by the properties of the suspension. Bacteria suspended in broth, 0.5 percent saline solution or human saliva showed a sharp peak in death rate around 50% RH, while bacteria suspension of sodium-free water didn’t show this pattern.

The authors made additional observations and drew some potentially crucial conclusions in view of infection prevention, which haven’t been scientifically proven over the past 50 years:

Quote: “The most striking fact revealed by these tests was the demonstration of the existence of a narrow range of relative humidity in the vicinity of 50 per cent which is rapidly lethal for microorganisms freshly sprayed into the atmosphere from a broth suspension”. 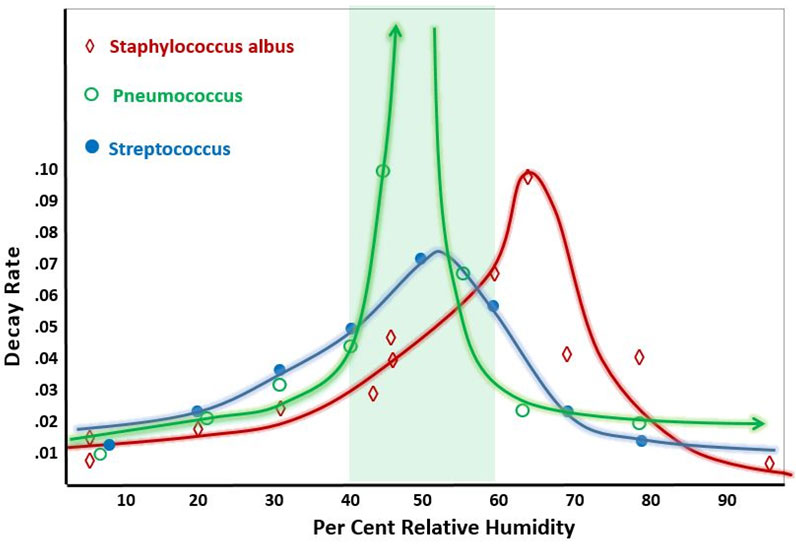 Low humidity acts as a conduit for viruses and airborne bacteria to disperse and travel around a building and threaten all occupants.

Dry air and our skin

Low humidity dries the outer layer of our skin leading to itchiness, cracking and dermatological problems.

Dry air and our eyes

The investigated airborne bacteria rapidly decayed when exposed to air of around 50%RH. This obviously demonstrates the protective effect of a mid-range humidity level.

The fact that no decaying effect was observed when the bacteria were sprayed in just water, as opposed to saliva or saline solutions, indicates that elements contained within the airborne droplets play a vital role in the bacteria’s inactivation.

At the time of the investigation, a whole generation of researchers in microbiology, infectious aerosols and airborne transmission were convinced that Dunklin and Puck’s results would have far-reaching consequences with regards how to control and prevent the spread of airborne infectious diseases.

Unfortunately, their research was not pursued scientifically until recently and the results have had little impact on building services design.

Other scientific studies relating to humidity and health...